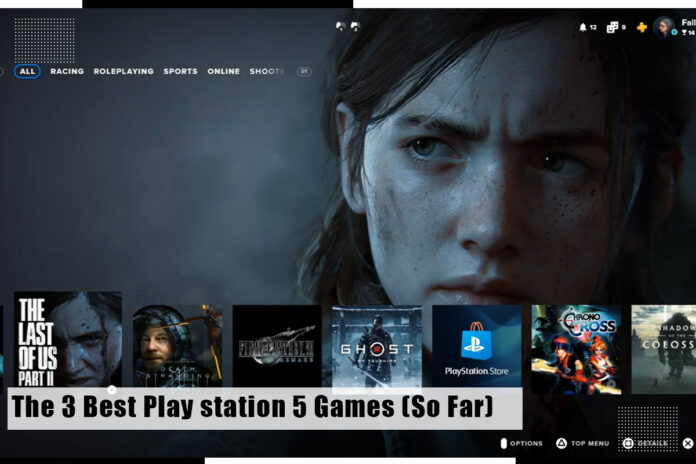 Despite the scarcity and high prices, the demand and popularity of Sony’s latest console are not diminishing. On the contrary, it remains the best-selling of this generation. To a large extent, that is due to a particular detail: its exclusive titles. Here we review the best PlayStation 5 games for beingoutstanding.

There is no doubt that the PlayStation 5 is the most popular console at the moment. The specific data says so: the sale of the venerable PS5 —both in its version with discs and digitally— is currently bending the hand of the Xbox X/S. The above, of course, does not necessarily imply that Sony’s console is better than Microsoft’s.

With games like the Uncharted saga, the popular Spider-Man, or the inexhaustible God of War, the Japanese console has a great advantage over its competition. And after the recent purchase of several studios and publishers – including the giant Activision-Blizzard – Xbox should shorten in the coming years. For now, it is PlayStation that keeps the trophy for the best exclusive games. And these are the best that have come out in recent months. Let’s explore the best PlayStation 5 games.

Gran Turismo 7 is a great addition to understand not only the graphic power of one of Sony’s star franchises but also one of the most popular racing games of all time. Gran Turismo has always exuded an extra quota of elegance in its aesthetics, its presentations, its soundtrack, and its general look, capable of reaching 4K resolutions at 60 frames per second. The game, which due to its style and sobriety, appeals to a different type of audience than other titles of the genre, defines itself as the “true car simulator” and takes it very seriously.

After a longer hiatus than fans would have liked, this seventh installment of the franchise -created in 1996 by Kazunori Yamauchi- focuses on exceptional graphics and views, as well as polishing its already classic simulation formula-based on collecting as many cars as possible.

The invitation that the game makes in its initial settings is interesting, where it proposes that the user optimize and choose which image performance mode he wants: it can be the ray-tracing mode, which favors better graphic performance, versus the performance mode, which focuses on the frames per second that the title can reach. Either way, it is an outstanding driving experience for fans and non-fans alike.

When it comes to action and adventure, few titles this year will be able to cover the ambitious, colorful, and dangerous world that this sequel delivers, the second part of the popular game Horizon Zero Dawn, released by Sony in 2017. This is set again on the west coast of a post-apocalyptic United States, with new dangers—a menacing plague—and again, a multitude of detailed robot animals to defeat along the way.

Mixing role-playing elements with strategic combat, the user once again takes control of Aloy, the game’s iconic young and courageous protagonist, who must travel to the aforementioned Forbidden West within the possibilities of this open world. There are multiple alternatives to advance in this complex but captivating science fiction story.

The work carried out by the Dutch studio Guerrilla Games is breathtaking: the different color palettes offered by each zone and the detailed art direction make it an absorbing experience, which runs and is experienced much better than its predecessor thanks to its sound, the feedback of its haptic control and the speed of loading.

In short, great action and adventure game with various mechanics and difficulties while developing an interesting story in impossibly beautiful settings. Beware: the version for PS4 (its physical version comes with two discs) can be digitally improved for free for PS5 (which only includes one disc).

Ghostwire: Tokyo is an original action-adventure blended with elements of Japanese folk horror, all from a first-person view set in a modern, neon-filled, backlit Tokyo. According to its creators, the game mixes magic and karate combat mechanics, evident in the protagonist’s choreographic hand movements.

The convoluted plot is set in the middle of a city mysteriously devoid of people, where only spirits and ghosts circulate. The protagonist is possessed by the spirit of a dead detective, who gives him magical powers to solve strange events while facing conspiracies and local urban legends.

With a polished narrative, a varied and entertaining combat system, and an engaging, hair-raising atmosphere, Ghostwire: Tokyo is already rising to be one of the contenders for game of the year.