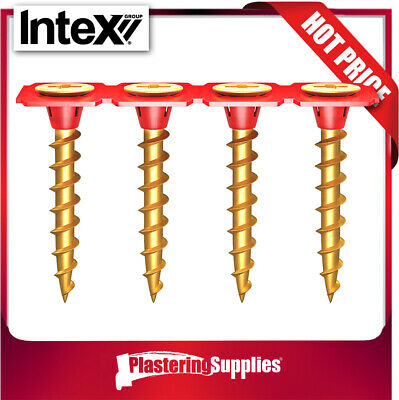 Collated screws are screws that are kept together by a strong plastic strip that is designed to fit into all major brand auto-feed screw-guns. To avoid jams in the auto feeder system, the collation process is entirely automated to ensure that the screws and plastic strip are correctly matched.

Collated drywall screws are the ideal choice for securing 12″ or 5/8″ drywall sheets to your ceiling joists or wall studs. Because of their auto-feed nature, these screws provide a significant advantage in terms of installation speed.

Despite the fact that collated screws are twice as expensive as bulk screws, the labour savings are well worth it. The more sheets installed, the more money made, especially for drywall installers who make a living by completing a specific square area of “footage” in a day’s time.

The pros of collated screws include:

Labour Reduction/ Ease of Use

Having the correct tools allows you to not only do your work more quickly, but also to give the best potential results. Collated screw guns with Tracer collated screws or Senco collated screws can be particularly beneficial for hanging drywall sheets.

Collated screws are easy to use because of their design. To push the screws in with a screw gun, you don’t need to use a lot of force. Furthermore, collated screws facilitate installation by allowing you to use them with a variety of screw guns if you have the appropriate nose cone adapter (sometimes referred to as a strip screw magazine).

Driving the screws vertically upwards into a ceiling, on the other hand, can cause powder to fall into your power driver, jamming it. In addition, disengaging the strip from the screw and driving through the drywall requires greater initial force than simply driving the screw into the wood.

When pushing collated screws into the ceiling or at arms’ length to one side, this is very inconvenient. While collated screws work well with normal drywall, they are generally ineffective when working with softer materials like cladding panels.

Choose collated screws if you want to hang drywall more quickly and with less force. Despite several drawbacks, the screws’ compatibility with screw guns and ease of use make them an unbeatable choice.