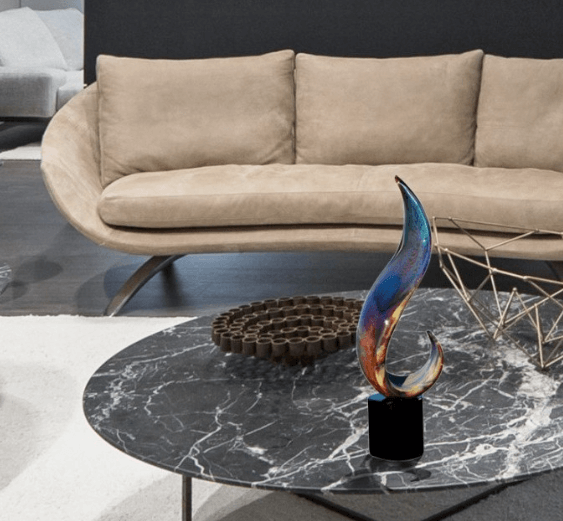 The island of Murano, located in the Venetian lagoon, offers a historical heritage regarding glass production. Called “Amuranium” in ancient times, it was initially occupied by the local population from Veneto who needed to escape from barbarian invasions.

However, when the Holy Roman Empire fell, what we now see as the Venetian lagoon was only an archipelago of islands and mud. The first population was established in Rivus Altus, which allowed for more protection as it was slightly higher than the rest.

The island of Murano existed since that period, but it became autonomous only around the 12th century. Just in 1275, the island had its chief magistrate, who led the Great Council. Together, they could release laws effective on the island, and a new currency was coined: the Oretta of Murano.

Murano has a geographical structure similar to Venice. The island is divided by one main canal, that connects all other smaller ones, which together form nine small islands.

Today Murano is known also as “the Isle of Glass”, for its well-known glass-making activities.

The production of glass started in Venice around 1000, but the furnaces represented a danger of fire. Most buildings were made of wood during that period, so flames and high temperatures represented a real danger. For safety reasons, the Doge ordered to move all of them to the island of Murano in 1291. After this decision, Glass Masters started to work only on the island of Murano. They could not even leave it to avoid the spread of the “secret” knowledge of this renowned profession. Despite this obligation, they were considered like nobles and were given many privileges, among which marrying aristocrats’ daughters.

Murano is a little jewel in the Venetian lagoon where charm and erudition are bound together. With a centenary history of continuously developing techniques, we can admire magnificent glass objects, born by passion and the genius intuitions of artisans. A passion for glass is breathed by walking around, and you can see it in glass creations’ lively and dancing reflections.

For example, you can admire the Abstract Figures made in chalcedony. This unique material is characterized by an infinite variety of nuances, which is impossible to be predicted. It has a dark and opaque vitreous substance whose recipe is composed of silver nitrate and other “secret” components that have been passed on since the 15th century.

Working with chalcedony is intriguing for the artisans: the impossibility of total control over the final color of the object is thrilling. Not even the most skilled Master can predict it or obtain the same shades by mixing all colors in the fire.

On the website of YourMurano, you can see all the multicolored creations entirely handmade by the glass Masters of Murano. The abstract sculptures catalog offers a vast choice of artistic and modern figures for your home environment. In these creations, the color has been left to speak for itself. The result? An irreplaceable sculpture to make your home stand out.

Share
Facebook
Twitter
Pinterest
WhatsApp
Previous article11 Easy Steps to Start a Podcasting Business to Generate Revenue: Tips to Monetize
Next articleWhat are the multiple facts and figures which you need to know about the Bombay stock exchange?