Why we’re going to Saudi Arabia from UK? 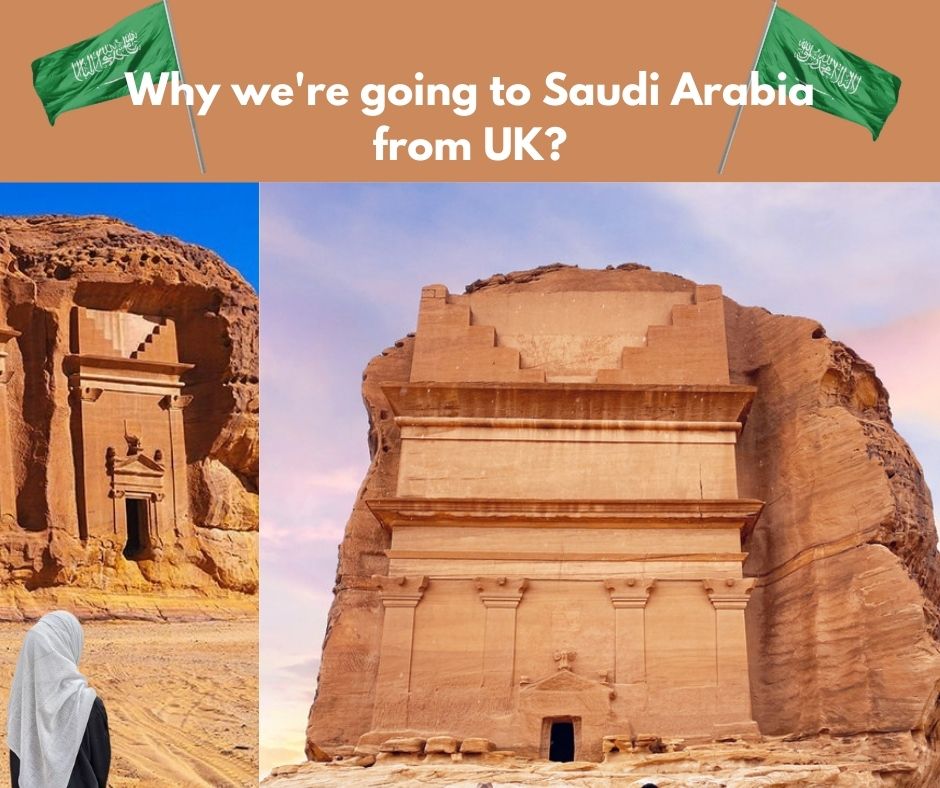 In “why we are going from UK to Saudi Arabia“, you will step into the undiscovered corners of the world. In this topic, we’ll know the reasons behind the planned visit to Saudi Arabia.

Going to Saudi Arabia from the UK:

As you begin to think about your ambitious travel to Saudi Arabia, the question of human rights will come to your mind many times. May coming to these questions divert your intentions from Saudi Arabia? Although the crime rate of any country may be lower, it cannot be zero.

We must recognize the possibility that tourism in Saudi Arabia is a welcome step for foreigners. While Muslims often visit this country to perform their religious duties (Hajj and Umrah). But this time the tourist step is for the benefit of everyone, whether the visitor is a Muslim or a non-Muslim. Now Muslims can perform Umrah on a travel visa, but non-Muslims are not allowed to travel to designated places in Mecca and Medina, regardless of their travel visa.

That is why Muslims can get tourist visas in their Umrah Packages but it is impossible for Hajj Packages.

At the beginning of the 21st century, at the request of Aung San Suu Kyi, most countries in the world, including the United Kingdom, boycotted international travel to Myanmar. However, for other destinations, travel is often encouraged for those who are oppressed. For example, foreigners are often encouraged to visit Tibet to get to know the inhabitants and their culture.

Despite the tensions between Israel and Palestine, tourists visit Palestine and Israel so that visitors can learn about the situation and talk to others when they return home. From this, it can be concluded that tourism is the best way to assess the situation of any country and increase one’s knowledge. Tourism introduces people to distant places and surprisingly diverse cultures, communicating and exchanging ideas like no other industry.

Saudi Arabia is a country whose livelihood depends largely on oil. In 2020, the epidemic caused a sharp decline in oil demand. So the Saudis opened the doors of the kingdom to tourists to further their livelihood.

There are many attractions in Saudi Arabia that were not possible for everyone to see before today. There are 6 UNESCO World Heritage Sites in KSA.

Along with these wonders, thousands of square miles of desert and 13 great mountain ranges make its identity unique in the Middle East. About 1750 km of coastline with different islands is also its identity. Saudi Arabia is a country with a desert climate because most of the area is desert. But you can experience all seasons here. If one wants to see snow falling like in Europe, here are the 8 coldest places where the temperature drops to -0 degrees.

These 8 coldest places are:

The Saudi government has launched various projects on national parks, nature reserves, and protected marine parks to boost tourism. Along with all these projects, the preservation of culture and heritage is also a commendable step of the Saudi government. This shows that Saudi Arabia is a safe country for everyone to take a trip.

Respect for civil and social rights is the real freedom of any nation and Saudi Arabia welcomes every foreigner under certain conditions.

Over the past few years, Saudi authorities have made significant changes to women’s rights, such as employment, driving and travelling without guardians. It is true, that many women who speak out for women’s rights are still in government custody.

So Saudi Arabia has become another tourist destination for British citizens because it was not possible before today. There is no denying the fact that Islam has become the second-largest religion in the UK based on the results of the 2018 Census.

Last year, about 25,000 Muslims took part in the Hajj and Umrah journey. This number of participants was been low due to various applicable restrictions. But this time the restrictions on Umrah and Hajj have been lifted. But some are valid for Hajj 2022, such as Age, Tawaklna App, COVID 19, and PCR.

Note: The Saudi government has made an important announcement for those Muslims who are going to participate in Hajj 2022. “Don’t pay for any suspicious websites or unlicensed agencies.”

Here, the passenger must confirm with the relevant agency whether it is real or fake. If you are one of the passengers of Hajj 2022, then you must check the ATOL number of your respective agency.

And don’t forget to read its reviews on Google. The Ministry of Hajj and Umrah also request travellers to confirm in advance whether their Hajj visas, accommodations and flights are included in the Hajj packages received.

What can’t you do during a trip to Saudi Arabia?

Saudi Arabia’s position in the Muslim world is like the heart of the human body. Therefore, you can experience real Sharia there as compared to other Muslim countries. Its official religion is Islam, but there are no restrictions on other religions. In other Middle Eastern countries, men and women may wear clothing that covers half or less of the body, but it is a crime to do so.

Try to dress modestly whether you are male or female. When going to any beach, do not wear a bikini, bra and underwear. No one can kiss their spouse in public. Everyone has the right to debate, but your discussion should not be about religion or government.

If you are a non-Muslim, do not enter non-Muslim restricted areas. Mecca and Medina are two holy cities for Muslims, so the Saudi government has closed these two cities to non-Muslims. Now non-Muslims can enter Madinah but not the Masjid al-Nabawi and other holy places.

Cutting off the hand is a punishment for theft, so don’t get involved in such wrongdoing.

The Saudis are more welcoming than we think. By respecting someone’s thinking and culture, we can win the trust of those concerned. Our media always tries to engage the public by spreading negative news. In contrast to good deeds and thoughts, bad deeds and thoughts always attract a human because it is human nature. Therefore, looking at the kingdom from a media point of view is a waste of time compared to visiting Saudi Arabia itself.