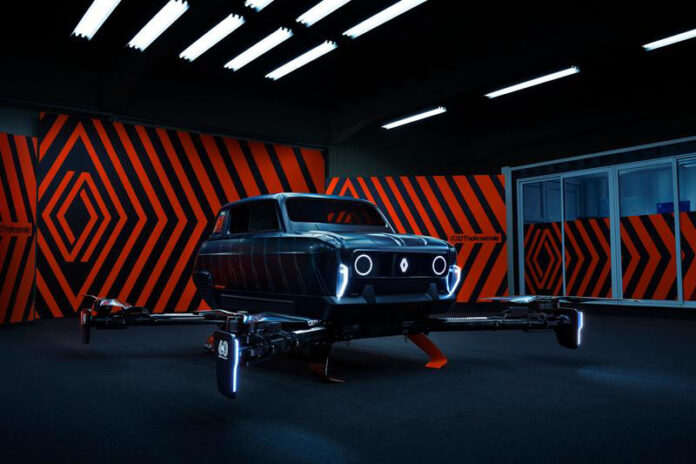 Renault is celebrating the 60th anniversary of its iconic 4L car with the launch of a flying car called AIR4, a collaboration with design studio TheArsenale to create a flying car.

The concept flying car continues the styling and dimensions of the Renault 4L. Capable of flying at altitudes of up to 700 meters, the AIR4 is a futuristic concept flying car made of carbon fiber to keep weight low and consisting of a body located at the center of four twin-bladed propellers.

Unlike the traditional cars like Renault Kwid 2022, the Renault AIR4 has no doors and offers no passenger seats, only one position for the driver (controller). Although the Air4 is called an electric flying car, it has no wheels and only four twin propellers located at the corners of the body. The tilt angle in flight is 45, with a maximum tilt angle of 70. Takeoff speed is 14m/s, landing speed is 3m/s, cruising speed is about 90km/h, and it can fly up to 700m high.

Although the exact range is unknown, it is hitched to a lithium polymer battery with a total capacity of 90,000mAh. But Renault doesn’t plan to mass-produce it. The Renault AIR4 will be on display at the Atelier Renault on the Champs-Elysées in Paris from November 29 to the end of the year, alongside other historic versions of the Renault 4, before heading to Miami, New York, and Macau in 2022.

IT House has learned that the Renault 4L, also known as the Renault 4L – Quatrelle, was the first front-engine, the front-wheel-drive family car produced by Renault. Between 1961 and 1994, in addition to the classic model were also launched vans, a four-wheel-drive versions, doorless convertible versions, military versions, and other derivatives, and even once among the Vatican Pope’s cars. Total sales exceeded 8 million units. Previously, Renault officially released the 2025 revival plan, which will launch 24 new cars by 2025, the launch of the Air4 may also be an allusion to the Renault 4L that will be resurrected in the form of electric cars.