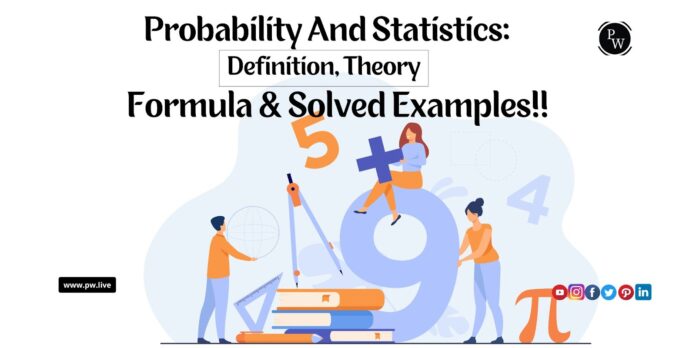 Probability and Statistics are the two most essential chapters in mathematics. This mini-lesson will be very useful if you are in classes 10, 11, or 12.

Probability is “chance” or an event that is likely to happen. Statistics is completely about the collection of data and handling it in a way using different techniques. Statistics help us to represent complex data in a very simple manner.

Often students avoid the importance of these chapters and focus on other units. Both chapters have significant weightage in the board and competitive examination. Students can easily grab the fundamentals of probability and statistics using NCERT Solution for class 10 maths.

This blog will touch every nerve of Probability and Statistics, including definitions, terms, formulas, and solved examples. Let us dive into the topic.

Probability deals with “random event” or “chance.” The branch of physics which deals with the possibility of outcomes in random events are probability. The value from 0 to 1 denotes probability. It also explains how likely something is to happen.

For example, what is the probability of getting a head when we toss a coin?

A coin has two sides one is the head, and the other is the tail. If we flip the coin, it is a high probability of coming either hear or tail result, so the probability of getting a head will be 1/2.

What is the probability of getting the Number two on the dice?

Dice consist of numbers 1 to 6. The possibility of getting Number two out of six is 1/6.

Probability is the ratio of the Number of favorable outcomes to total outcomes.

All those experiments whose outcomes can not be predicted until it noticed are called random experiments. E.g., if you throw a dice randomly, the possibility of getting the number 3 on the dice is uncertain. You can get any random number from 1 to 6.

It is the outcome or result of an experiment; for, e.g., if you flip a coin, getting a tail is an event.

The unpredicted events or the possibility of outcomes significantly less are known as Random Events. The formation of the rainbow is an example of a random event.

The Number of experiments in the experiment process is called a trial. For example, flipping the coin is a trial.

To pass the examination with flying colors, students are required to cover the topics given in their syllabus. Here we have listed all the basic probability topics which are very crucial for the board as well as competitive examinations.

Question-1: Find the probability of getting two on rolling dice?

Let A represent the event of getting 2

Hence getting 2 on rolling dice is = ⅙

The probability of getting two on rolling dice is ⅙.

Question-2: What is the probability of getting any face card from a pack of cards?

Suppose E be the event of getting face cards

Number of favorable events((considered Jack, Queen, and King only)

The possibility of getting a face card in the deck of cards is 3/13.

Statistics is the branch of applied mathematics that deals with the collection, analysis, interpretation, and organization of data handling using different techniques.

From collecting data on the country’s population and economy to an In-depth study of data analysis, every domain uses statistics for qualitative and quantitative approaches.

Question-1:Find the mean of the first ten natural numbers.

Mean = sum of given all the numbers/total number

We can see that eight occurs maximum times, so the mode of the following observations is 8.

1. What is the probability formula?

2. What is the byes theorem and its formula?

3. How many types of probability are there in mathematics?

There are majorly three types of probability

4. What are the types of statistics?

There are two types of statistics.

5. How to calculate the median?