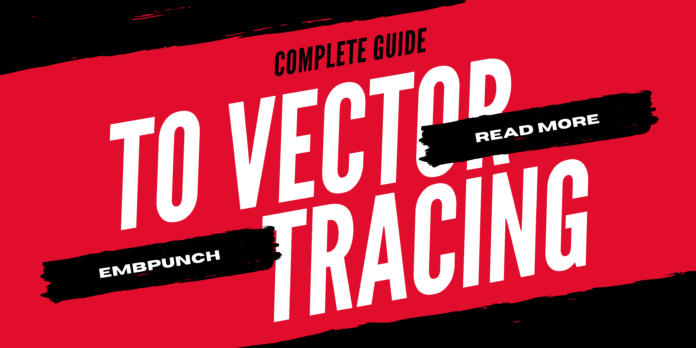 The process of vectorizing a raster image using any vector software is referred to as vector tracing. Vector tracing is a popular technique for embroidery companies looking for high-quality graphics to embroider on a variety of surfaces. To achieve better results, graphic designers frequently use vector tracing to recreate raster images.

For those of you who aren’t sure what the distinctions between raster and vector images are, let’s delve a little deeper into the two popular image formats and determine their core differences.

What is the difference between vector and raster images?

Raster images are made up of very small “pixels,” which are the image’s smallest unit. The quality and dimension of the pixels in your smartphone’s camera are represented by the “MegaPixel” resolution. Pixels, on the other hand, have definite dimensions, which becomes a major limitation for raster-based images. Raster-based images can’t be stretched or compressed too much without losing quality, which is known as the “Blurring” effect. This is a significant limitation, as it makes working with raster-based images difficult for designers and the embroidery industry.

Vector images come to the rescue in this situation.

Vector images are primarily made up of arithmetic lines. This means that these images can be stretched and compressed to virtually any size without sacrificing detail or quality. As a result, working with vector images professionally is easier and more flexible. As a result, graphic designers and the embroidery industry prefer to work with vector images, which can be resized without losing quality.

Now that you understand the basic differences between vector and raster images, as well as why vector images are so valuable in the professional world, let’s look at how you can perform vector tracing with software.

To begin, you’ll need vector conversion software such as CorelDRAW, which will assist you in tracing the raster image and recreating the vector image. Once you’ve finished tracing the image, you can simply export the vector file in any of the popular vector formats, such as EPS, to have it printed without losing quality.

Isn’t that a pretty straightforward procedure?

Let’s look at some of the details involved in the vector tracing process so you can recreate vector images perfectly.

Vector tracing software: How to Use It

Vector tracing can be done with a variety of vector software, as previously mentioned. We’ll be using CorelDRAW Graphics Suite as our vector tracing software exclusively in this blog.

You must open the “Raster” file in a new document to perform vector tracing for a simple logo. Go to Bitmaps > Outline Trace after the image has loaded. There are several options to choose from here, but since we’re working with logos, selecting “Logo” should suffice.

The “PowerTRACE” tool will automatically analyse the logo file and highlight vector outlines in the form of suggestions once you click the “Logo” tab. You’ll also get a “preview” to compare before and after.

Simply drag the slider on the right side of the screen to fine-tune the level of details, such as corner rounding, smoothing, and others. The time it takes to refine the outlines will be determined by the Logo’s complexity. You’ll have to refine the tool if it misses some subtle details, especially in the area of typography. You can work with the outlines to refine them and make any necessary adjustments.

To see the colours identified by the automated trace tool, go to the “Colors” tab. You can make any necessary colour adjustments once more. Your fine-tuning efforts will determine the final quality of vector tracing. Simple logos may be perfectly traced automatically by the tool, but a complex logo would require many finer adjustments.

After you’ve finished making adjustments, simply export the file. To export, select File > Export from the menu bar. After clicking “Export,” you can select your prefered file format, such as EPS, CDR, SVG, or another.

Congratulations, you’re now prepared to begin vector tracing in the CorelDRAW environment. You may find it difficult to refine the details at first; as a result, we recommend beginning with simple images and gradually progressing to more complex images.