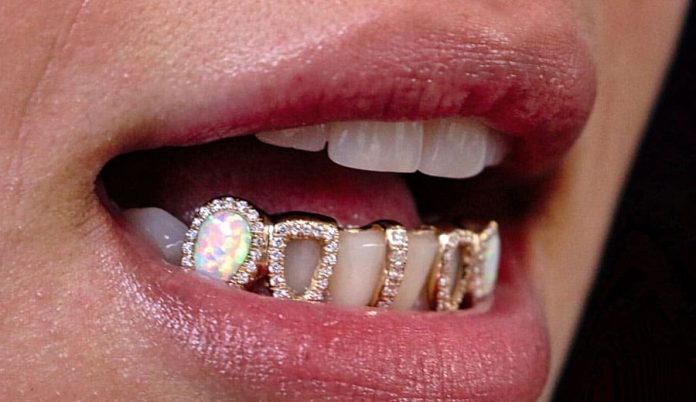 When bling is the “in thing”, especially if you have celebrity status, your teeth should not be left behind. The latest (but quite the longest) trend for teeth is no colorful pair of braces, but gems instead! On one end of the spectrum, there is Quavo Huncho with a complete ice diamond set of teeth, and on the other is A$AP Rocky with a yellow gold setting. Grillz is simply jewelry for your teeth. Right now, the renaissance for beautiful teeth is in full swing by adorning your teeth with a set of gems.

What are Grillz teeth?

You may think that jewelry is enough to satisfy anyone, but if you don’t have fine cut diamonds adorning your teeth, you are not with the jet set. Grillz teeth are made of metal, typically gold, diamond or platinum, with encrusted gems. They are worn over teeth and they are removable. Nonetheless, there are some people who prefer permanent Grillz. Nevertheless, if you opt for the permanent kind, this means they may leave room for infection and cleaning becomes difficult.

The fad of Grillz teeth began somewhere in the 80s and is revived now. A large part of hip hop chic, Grillz are also called fonts and golds. Essentially, if you go in for the Grillz that are removable, the Grillz have a sliding mechanism fitting on your natural teeth. Several rappers and other celebrities, mostly from the music industry, sport permanent Grillz. In a sense, these are fake teeth worn as bridges or crowns. If Grillz is worn as crowns, teeth are shaped to accommodate the crowns on top (like a cap).

What are fake teeth?

When you think of Grillz, your mind immediately wonders about fake teeth. While fake teeth are prosthetic devices, worn as dentures, Grillz may be dazzling covers for celebrities from Rihanna to Katy Perry. False teeth are fitted into the gums, either by implant surgery, or may be removable. The Grillz that are removable may be called “fake teeth”. These are the ones you can remove.

The Celebrities that Use Grillz or Fake Teeth

The purpose of fake teeth is to replace teeth that are lost, either due to age or injury. The purpose of wearing Grillz is purely as a fashion accessory. For instance, Beyonce has been sporting Grillz, fangs made of diamonds, and appeared on Instagram. Rihanna has a pure gold Grillz emblem on the side of her pearly whites, and this is a gold Ak-47! With Grillz, you can either have a single tooth in gems, a whole set, or a motif anywhere on your line of teeth.

Here are some hot celebrities and the popular Grillz close to their hearts: